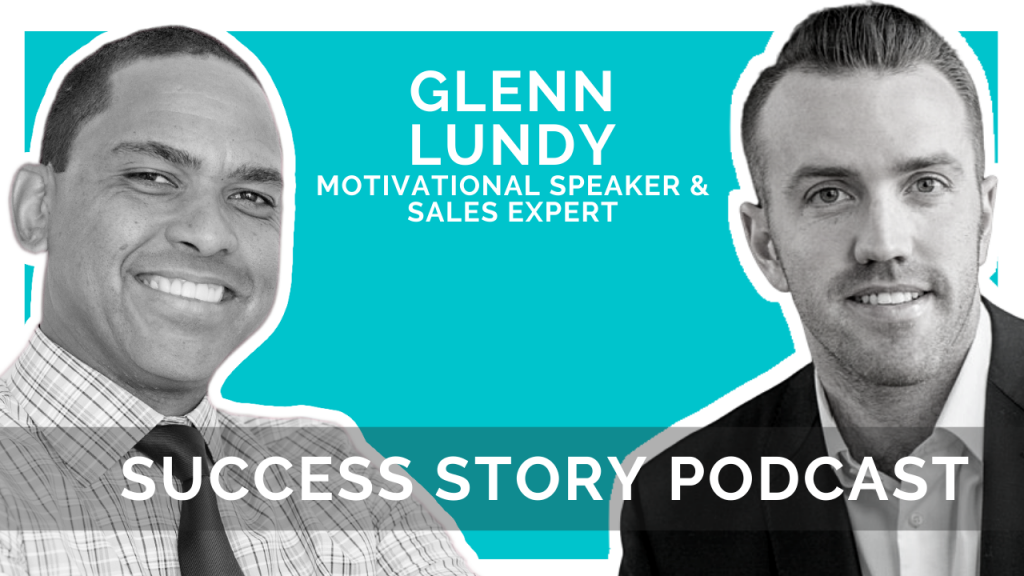 How to Rise & Grind and Lead With Purpose With Glenn Lundy, Motivational Speaker & Sales Expert

Enjoyed the Success Story Podcast?
Leaving a Rating on iTunes or a Follow on Spotify helps more people find us!

Glenn Lundy is the host of the wildly popular Facebook Live show #RiseAndGrind and top Clubhouse group Breakfast with Champions. He’s been seen at places like Hustle and Grind Con, Grow Your Business For God’s Sake! and many more stages across the country. Glenn has been spotlighted on ABC, NBC, and CBS, and is an expert in dealership culture development, and leadership training.

With 20 years experience in the automotive industry, Glenn lead a dealership from 120 cars a month to an 800% increase in sales in five years, becoming the 2nd largest used car franchise in the country. His unique style makes him one of the most coveted GM’s in the business. Glenn has the unique ability to help identify the areas for growth in your store, and teach creative ways to invoke your dealerships spirit. With a background in sales, and finance, he uses his skill sets to create growth, as well as tapping into the mental side of human development.

What is the Success Story Podcast?

Scott will discuss some of the lessons he’s learned over his own career, as well as have candid interviews with execs, celebrities, notable figures and politicians. All who have achieved success through both wins and losses, to learn more about their life, their ideas and insights.

He sits down with leaders and mentors and unpacks their story to help pass those lessons onto others through both experiences and tactical strategy for business professionals, entrepreneurs and everyone in between.

Welcome to success story the most useful podcast in the world. I’m your host Scott D. Clary. The success story podcast is part of the HubSpot Podcast Network. The HubSpot Podcast Network is the audio destination for business professionals who seek the best education and inspiration on how to grow a business. HubSpot Podcast Network hosts act as on demand mentors to entrepreneurs, startups and scale ups through practical tips and inspirational stories listen, learn and grow with the HubSpot Podcast Network at hubspot.com/podcast network today my guest is Glenn Lundy. Glen is the host of the wildly popular Facebook Live show hashtag rise and grind and top clubhouse group breakfast of champions has been seen at places like the hustle and grind con grow your business for God’s sake and many more stages. internationally. He has been spotlighted on ABC, NBC and CBS and is an expert in sales and business culture development and leadership training. He has 20 years experience in the automotive industry. He led a dealership from 120 cars a month to an 800% increase in sales and five years becoming the second largest car franchise in the country. His unique style makes him one of the most coveted gems in the business. But he does much more than that. He has a unique ability to identify areas of growth in businesses, not just in automotive teach creative ways to invoke a spirit, a culture a sense of pride and belonging in an organization. He has a background in sales finance, he uses his skill sets to create growth as well as taps into the mental and psychological side of human development. What did we speak about? So we spoke about his humble beginnings he has a very, very impressive story. It was not always easy for him. We speak about him reaching the epitome of success, losing it all and building himself back up. We speak about morning routines. We speak about accountability. We speak about cultures of leadership and development. We speak about the importance of gratitude in your life. We speak about living the best version of yourself. We speak about some entrepreneurship lessons we also speak about when he was homeless and he attempted suicide at its very lowest point to now where he speaks globally on sales, marketing, business, leadership culture, as well as some mental and psychological hacks you can use to unlock potential in yourself in any career, any industry. I’m really happy we had the chance to sit together and just dive into his story because there’s so many lessons that we pulled out of that so I’ll let him go into detail. I didn’t go into depth this is Glenn

Lundy. Thank you for teaching me what not to do and who not to be 20 year old me knew everything and 20 year old me made every mistake you could possibly think of

Welcome to success story. I’m your host Scott D. Clary, and today my guest is Glen Lundy. He is a husband to one a father to eight. He’s the host of the wildly popular Facebook Live show rise and grind and a top clubhouse group host breakfast with champions. He has over 20 years of automotive experience where he led a dealership from 120 cars a month to an 800% increase in sales in five years becoming the second largest car used car franchise in the country. His unique style made him one of the most coveted gems in the business. This was his backstory that he built out before he eventually started rising grind and breakfast with Campion’s Glenn has a unique ability to identify areas of growth in sales organizations and in people. And that’s what he teaches entrepreneurs side hustlers, executives, he’s been spotlight on ABC, NBC, CBS, he speaks with, of course, car dealerships, but also just businesses on sales, culture development, leadership training, Glenn, I really appreciate you taking the time. I’m excited to go into your origin story. Unpack your car dealership your before the car dealership, and then the stuff you’re working on now. So walk me back, man.

What’s, what’s the current iteration of Glenn? How did that more from, I guess the 800% increase in sales at a Kentucky car dealership to speaking evangelizing rising grind podcast, personal brand? How did that transformation happen?

Yeah, so it’s interesting when you hit certain moments of your life, the the gratitude that comes from additional moments, right. So now that I’m on this side, I feel very grateful to have the opportunity to make a difference and to make an impact. And at the same time, I feel an obligation and a responsibility to do so. In so when I first went into the dealership there, it was important to me that we took that dealership to the top, which I did. And we took that dealership to the top by the owner, Josh Cummins, and myself, and just an incredible team of people pouring into humans, making better humans, not better salespeople, better humans, all around, people that were rising earlier, taking care of obligations at home being better husbands and wives being better brothers and sisters being members of better outstanding members of the community taking care of their health, right? We taught people life skills, not just job skills, managing your money, right, all of these things. And so it was incredibly important to me, that we develop the humans because the industry itself usually does the opposite. It usually tears humans apart, it tears relationships apart, so on and so forth. And so now I’m just on this path where I feel it’s like a pay it forward type thing. So I feel that it is my role and responsibility to help people change the way they start their day, and ultimately level up in the seven main areas of their life, right faith, fitness, finances, their friends, their families, their careers, and ultimately how they feel about themselves, right their mindset. And so the vessel that I do that in continues to change, the mission stays the same. For a while it was in the dealership, then we then it outgrew that. And then it was on the internet with a morning show called Rising grind. And then it kind of outgrew that. And it became stages and events and things like clubhouse where we do breakfast with champions and traveling all over the world, right? Like it continues to expand. And so the vessel changes now I’m an entrepreneur now Oh, no business, those types of things. The vessel changes, but the mission stays the same. If that makes sense.

Does it makes a lot of sense. Let’s Let’s speak about and unpack the the first iteration of the strategy that you use to upskill and uplevel those people in the dealership, because obviously it’s evolved. And I want to understand how it’s evolved. But I also want to just speak about, like the very, very basics like the grassroots of that Id X, I think it’s important and it obviously was successful. So let’s talk about what sales traditionally is in car dealerships. And let’s talk about what you made it.

No, no no I thought I’ll challenge I’ll say like just just try it you know cuz now I’m just thinking about let me just do a week of I’m good with this news. I usually try and get myself up cuz I can’t stand it I had no idea about the science but it makes sense now cuz I feel like crap. Whenever I do snooze, but the phone in the mornings an issue, but I want to try that. I definitely want to try. I’ve heard that from a few people actually. So that’s something that I want to action, but yeah, sorry. I would say if you’re not doing it, you should be doing You should at least try and see and again, like, monitor and be self aware enough to know your mood, your energy, how you tackle the day, your productivity between nine to 12. Like, let’s just let’s just as opposed to just shutting and saying no, let’s let’s, let’s run an experiment on ourselves. I think that’s a really smart idea. And that’s the way you’re going to sell yourself on it. If you can try it for a week and you notice some tangible results and you get more done, and buy lunch. Now all of a sudden, you have no more work for the afternoon because you actually kicked off the day, right yet energy, your positive view, and you just tackled everything and it felt effortless. You’re going to keep that habit up. So I say prove it to yourself.