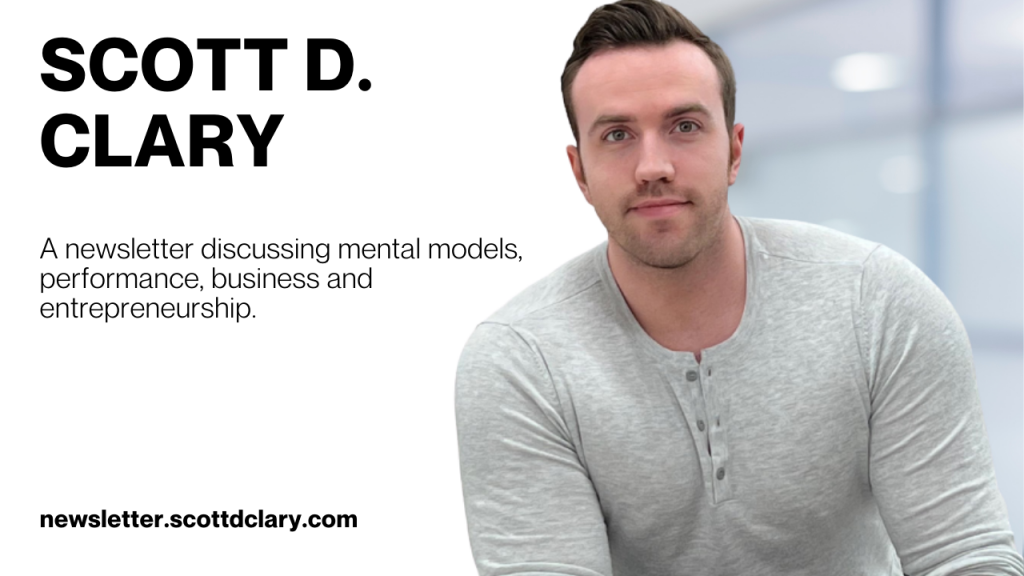 How To Catch A Whale

Here is my weekly email with some insights and ideas pulled from conversations I had on my podcast.

The Most Comfortable Boxers You’ll Ever Wear

When we designed Boxers 2.0, our mission was simple: make the most comfortable boxers a man could buy. It starts with The Jewel Pouch™, a dedicated space that cradles your stones in place with a perforated performance fabric for extra breathability. Cut from Micro Modal with anti-chafing, smooth, flatlock seams—we made our boxers so comfortable and supportive, they feel like a second skin.

How To Catch A Whale

I’ve always thought that it takes a special kind of person to be a salesperson. Of course, anyone can do it – but not everyone can do it well. It takes drive, confidence, and most importantly, the courage to innovate and take risks. Especially if you’re trying to catch a whale.

Ryan Staley is someone I had the pleasure of interviewing this time last year, and I’m excited to be sharing his story with you all in today’s newsletter. It’s inspiring to hear from people who step out of their industry’s cookie-cutter mold in order to achieve big things.

As CEO of his own company, Whale Boss, Ryan helps execs and CEOs land big-figure sales in short 3-month sprints – an incredible achievement in any market. But how did he get there? What’s his alluring secret to catching a whale and landing big enterprise clients?

Starting Out As A Small Fry

Ryan’s career in sales started out like anyone else’s. He was working all hours, and becoming incredibly frustrated with the process.

“When I was a rep, I closed zero deals in the first eight months there – which is really, really hard. And I finally figured it out and found my way… [but] I got sick of working 60 hours a week to make 100% of my quota.”

I can completely understand this frustration. It’s a tough industry to break into, and the hours are definitely not for everyone. Most salespeople make 40 percent of their salary in commission, but for some, it’s closer to the 50-50 mark (or even higher).

No wonder Ryan was dissatisfied, stressed, and longing for another way to do things.

“When I saw another guy who was flying on private jets work nine months of the year and only 30 hours a week, I really dissected what this guy was doing. I had to figure this out.”

“I reverse-engineered it. Out of the 180% of quota he hit every year, roughly about 130% of it came from two deals. He’s basically got two customers, and then he’s just adding on some other components.”

Ryan thought back to all the companies he’d worked for, and a pattern began to emerge; every single company had one or two people who took on the whales, while the rest of the sales team fought over the smaller fish.

“Every single sales company I worked at had the same kind of model; it was a trend, it was a pattern. So I started to really focus on that.”

Soon enough, Ryan’s company got onboard with his way of thinking and asked him to create their enterprise team – the salespeople who would go after the whales – totally from scratch.

“We had no playbook. We had no marketing department. I didn’t even have a team. So I looked at the experience I had prior; I started deconstructing all the big deals that our company had, and the patterns and verticals and exact situations that they did.”

I was floored just thinking about the amount of work this would have taken – and to have to do it on your own? Talk about growth.

“I started to see patterns in terms of how people bought what they did, and how they acquired different customers. And so I modeled all those success factors, and then packaged it into a process that I developed from scratch on how to sell enterprise deals.”

All of this work led to incredible success for the company he worked for at the time. He’d cracked the code, alright.

The new system Ryan developed seemed to go from strength to strength; it was boosting their business to new heights in a matter of a few years.

This new business unit resulted in growth from zero to $30 million annual recurring revenue, $30 million in capital revenue, over thirty $500,000 plus contracts, and a $20 million contract. And he did it all with exactly four salespeople and no lead generation whatsoever.

“We specifically focused on continually expanding and multiplying our biggest customers. And that’s how we were able to be resourceful and get those results.”

With his newfound and continually re-affirmed strategy, Ryan was busting to share what he’d learned with other salespeople. Why weren’t more people aware of this? He began designing a course to teach other sales professionals how to land big deals – but not everyone was happy about it, and his company let him go.

To Ryan’s credit, he hardly skipped a beat.

“I kept saying to myself, ‘Ryan, this is going to be a hell of a comeback story. There’s gonna be a hell of a redemption story. I started talking to my network, and people said, ‘What you did, I want you to do that for my company.’ And so I started to focus on it – and the more I focused on it, the more it started to grow.”

Ryan began teaching other companies how to focus on scaling their big clients, and from there, his business snowballed. Whale Boss is now a thriving company that benefits from Ryan’s smorgasbord of valuable experience and frameworks.

“Essentially, I coach CEOs on how to implement those systems that got results for me in a resource constrained environment where they don’t have tons of venture capital.”

In our interview, Ryan was awesome enough to share a snapshot of the three-step framework he uses to help clients land big deals. Let’s take a look.

According to Ryan, the first step is to look at the biggest clients you currently have. Work on turning them into bigger clients through upselling, cross-selling, and expanding the services you offer them.

“Number one is this: what are your top five clients? And how do we replicate and expand them every single year? If you have five customers that are paying you $20,000 a month, how do we make that 10 customers next year each paying you $30,000 a month? The numbers add up really, really quick.”

See, it’s not all about finding someone new who will pay you more than the others. Look at what you’re already doing well and expand on it by offering more to your current clients – but do it in steps, not leaps and bounds.

“If someone’s paying you 20k a month, you can double it to 50k a year. Where people go wrong is trying to go from 20k a month to $200,000 a month, when the customers don’t have the references or the infrastructure to support that.”

Once you’ve worked your clients into whales, it’s time to think about generating as much value as possible.

“The next one is a secondary sales process, which means expanding existing customers in terms of average dollar value, lifetime value, or whatever acronym you’re using.”

Ryan explained that this second step is where too many companies get it wrong.

“What happens is companies will spend six months, eight months, nine months, sometimes even a year getting a customer. They get the customer, and then they don’t talk to them. They don’t have a process to create continual value.”

You’ve got to be intentional about prolonging and expanding the value you’re gaining from each customer – and you can do that by focusing on all of their business problems, not just the one they told you about when they signed up.

“Let’s face it: whenever you get one problem solved, there’s usually five new problems that occur as a result of that.”

3. Use A Referral System

And finally, once you’ve maximized the value you’re getting from each individual customer, it’s time to start thinking about finding new enterprise clients. How? By using your current clients as a referral system.

Ryan explained that most companies are missing out on a huge opportunity by not implementing a referral system.

“You build up all this capital with your customers, but you don’t systemize on them spreading their word and accelerating the word of all the work that you’ve done to them to make them happy.”

Seems like a waste, right? That’s why we should be taking inspiration from companies like Dropbox, who used a simple incentive-based referral system to go from 100k users to 4 million users in 18 months.

“People feel the need to reciprocate if you give them something of value, specifically on the spot,” Ryan explained. “When you go to a diner and your waiter or waitress comes with the bill, the ones that give you something first get a 17% increase in tips. If they make it custom or specific to you, those people get a 30% bump in their tips.”

What does that mean for you? Well, if you incentivize referrals using a simple system, you’ll be attracting whales left and right. Don’t just rely on individual referrals – make it a part of your structure and operations.

And there you have it – Ryan’s incredible story of branching out into new territory and making a big splash. I think it’s so important to learn from people who do things differently, and I hope his story has inspired you to take some risks of your own.

Disclaimer: No whales were harmed in the making of this newsletter.

Have an excellent week, and don’t forget to watch the full interview with Ryan Staley over on my YT channel.

If you like the content in this newsletter, I host a Top 10 Business podcast, (with over 20m downloads) called “Success Story”, where I interview entrepreneurs, executives and other high performing individuals so you can learn lessons and insights from the world-renowned leaders.

Listen To The Podcast

Get our free, 5 minute daily newsletter. Used by 50,000+ people to stay up to date on business, tech, finance and cryptocurrency. 💪