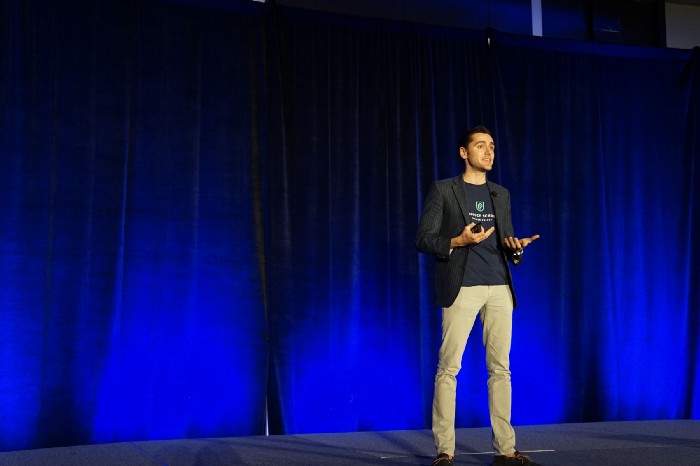 The Framing Effect & How to Use it in Your Next Presentation

It’s the age-old question: is the glass half full or half empty? According to the framing effect, telling our audience the glass is half full means they’ll have a more positive opinion of the glass itself. As you can imagine, this effect is a powerful tool in your presentation arsenal!

Depending on the type of presentation you’re preparing for, one of your goals might be getting your audience to either change how they think about something, or to have an opinion on a particular topic, object, or idea.

And with the framing effect, you have the power to actually frame the presentation topic in the direction of your choice.

The framing effect and cognitive bias

As any seasoned presenter will tell you, one of the challenges you’ll come up against with an audience is their cognitive bias. Any given audience comes into a presentation with a certain set of beliefs or ideas about different topics.

As a presenter, it’s your job to not only share accurate, reliable information, but to frame it in a way that helps your audience think of that information in either a positive or negative way, depending on your goals and despite their inherent biases.

If you want your audience to make decisions or form opinions, you can influence these decisions or opinions by framing the information you share in a particular way–AKA, the framing effect.

But it’s important not to conflate the framing effect with misrepresenting information or misleading your audience.

Rather, it’s a way of framing that same information in a way that makes it more or less attractive to the audience, depending on the desired outcome of your presentation.

The framing effect in action

Sally goes to the grocery store because she has a craving for chocolate chip cookies.

She sees two boxes of cookies on the shelf for the same price. Both have attractive packaging and the same amount of cookies.

Which box of cookies do you think she’ll choose? If she’s like the vast majority of people, she’ll go with the 15% less fat option.

Let’s look at another example.

You compete in a bowling tournament with ten other bowlers in your league.

Using the framing effect during presentations

Now, if you’re presenting to an audience with the goal of persuading your audience one way or another, there are a few different ways you can use the framing effect.

Let’s say you’re speaking to an audience without any visual aids, like graphic or text. In this case, it will be up to your auditory presenting skills to get the job done.

Here are some things to keep in mind to frame your content according to your goals:

If your presentation includes visual elements, there are plenty of ways the framing effect can come into play.

Imagine you’re presenting a new men’s running shoe model to a crowd of men. The shoe itself is white with black detailing.

In one image, you frame the photo of the shoe with a pink, floral border. On the other side, you frame that very same image with a bold blue frame.

While there are no concrete rules that say pink is for women and blue is for men, studies do show that men find the color blue most appealing.

So in this case, if you want to use visual framing to appeal to your male audience, going for the image with the blue frame would be the better choice.

No matter what you’re presenting or the goal of your presentation, keeping your body language in mind is critical.

Your body language can frame how the audience interprets your content.

Think about the last presentation you sat through.

How did the presenter come across? Did they stand up straight and portray confidence? Or were they hunched over, low energy, and looking down at the ground?

Now, compare their body language to how you felt coming away from the presentation.

If they used strong, confident body language, it likely framed the entire experience in a more positive light for you.

Conversely, if their body language came across as them being disinterested or disengaged, you likely have a negative view of the same presentation.

In fact, you could come away from two presentations, both with the exact some content, but with two different presenters, and have an entirely different opinion on the presentation based on the body language that was used.